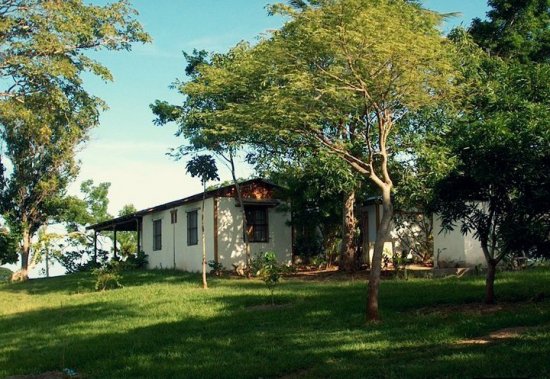 Finca "La Primavera" is a privated family farm and natural reserve which covers some 35 hectares with over 130 species of tropical dry forest trees, tree -pasture and agro forestry systems. It is located in San Juan del Sur county, Rivas Department, on the historic route which the Spanish explorer Gil Gonzales used in the 16th century on his way into the interior of Nicaragua. In the late 19th century a plan to build an interoceanic canal through Nicaragua was drafted, its path crossing just few kilometers north of the Finca connecting the isthmus of Rivas and the Cocibolca -Nicaragua Lake- and the Pacific Ocean in the area of Brito.

This plan was recently resumed, if he'll ever realized is not clear at the present time. In the twenties of the last century, a narrow gauge railway was built which connected the port town of San Juan del Sur on the Pacific coast to the inland port at San Jorge at the Cocibolca lake. This railway was working until the end of the fifties, since via the former railway embankment, the NIC 72; at kilometer 12 is located in the hamlet of San Antonio the La Primavera Farm.

In 2002, an area of 8 hectares within the farm area was officially declared by the Nicaraguan Ministry of Nature Protection MARENA as "Private Forest Reserve" (RSP), and is therefore part of the national network of natural and national parks SINAP.

La Primavera belongs to the Central American Bio-corridor and contributes along with other RSP's for ecological connectivity of important remainders of the tropical dry forest on the isthmus of Rivas.

It is also the fact that La Primavera offers an excellent observatory for bird lovers, for example, here are encountered the rare ground-nesting birds Acaravan.

The most important economic source of income of the farm is the fattening of cattle, depending on the season the inventory varies between 10 and 50 bulls. There is also a herd of 20-30 Cameroon sheep; these are North African origin and have no wool dress but a shorthaired coat.

The mature for slaughter animals are marketed in the region itself.

Livestock production is integrated into agro forestry systems; various tree species are used here as an important source of protein for animal feed and are specially cultivated for this purpose and chopped at harvest. Also, there are certified timber plantations with tropical woods such as cedar, mahogany, teak and other native and foreign species of trees.

The farm contributes to local employment with 3 salaried persons.

In the "Casa Loma", the guest house of the farm there is currently room for up to 8 adults, besides there is the possibility on the big lawns around to camp.

There is swimming offered in a water reservoir in the area, excursions on the farm or participation in the accumulated farm work. Guided walkarounds with explanations of agricultural and forestry production that encountered flora and fauna can be arranged as well as riding excursions to the nearby beaches Marsella or Maderas. Watch the many species of birds early in the morning or at sunset, hear the wake-up call of the Congo monkeys, this place is ideal to relax!

The Casa Loma counts 3 bedrooms and two bathrooms, a fully equipped kitchen with refrigerator and gas stove, electric power (120/240 VAC) and running water. A rambling wraparound porch with benches and chairs and several hammocks invites you to linger. A barbecue and an oven are available to our guests.

If you do not want to cook, there is the possibility to order breakfast or other meals with Doña María.

At Finca La Primavera visitors can undertake various activities. The rural landscape can be enjoyed in a tranquil and secure environment, but visitors can also participate in the farmers’ activities like nurturing, milking, or guarding the cattle, which are the primary functions of the farm. Horseback riding is also among the possibilities, and there is a large quantity of birds and trees (there are more than 120 tree species at the reserve). Furthermore, visits to the nearby hills or beaches can also be organized.

From Rivas
Take the so-called La Chocolata Road from the city of Rivas (ask at the central park). Take this road for about 12 kilometers, until San Antonio town, here you will find La Pimavera sign, that indicates the entrance of the reserve.

From la Virgen
Take NIC 16 paved road (connecting La Virgen and San juan del Sur). In 132.5 kilometer, find the "Boca de Motala" entrace and take this dirty road for about 3 kilometers. Then turn right in th Rivas-San Jua de Sur old road, and coantinue for about 1 kilometer to the North. You will find La Pimavera sign and entrance on the left.