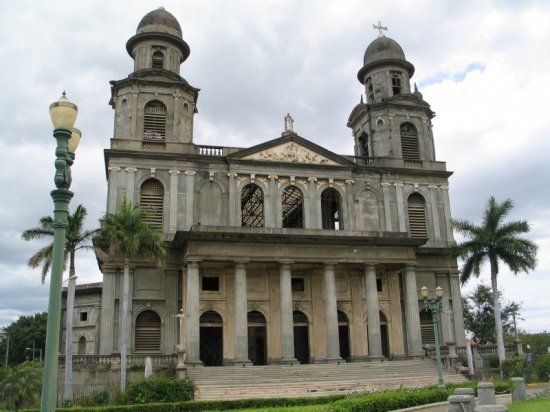 After the earthquake of 1972 the former center of Managua was completely destroyed. It was due to this devastating earthquake that Managua nowadays has no real center. New shopping malls and hotels were rebuilt on other locations, which formed the bases for Managua’s dispersed structure.

The old center, however, is still partially intact. There are several buildings that date from before the earthquake – some used and some unused – and you can easily visit this historical place and stroll around. The most illustrating example is the Catedral de Santiago. This impressive cathedral was not flattened by the earthquake, but it was damaged and abandoned.

The cathedral was closed to the public because the government feared collapsing. You can, however, walk around and get an idea of the importance of this remarkable building. Next to the old cathedral you will find a modern, sparkling building. This is the presidential house. Opposite to the presidential house lays an even more impressing building: the National Palace. This building nowadays functions (partially) as a museum, so don’t forget to go in and check out the National Museum.

The Plaza de la República, as this place is called, also houses monuments that commemorate Nicaragua’s heroes like Carlos Fonseca Amador and Rubén Darío. You can wander around in the small park where most of the monuments are located. You will, however, be probably shortly after arrival tracked down by the street kids that try to sell you hand-made objects or beg for money.

To get there, you can tell a taxi driver to bring you to the Plaza de la República. This should cost around $2-3 from the MetroCentro shopping hall (C$35 – 45). With your own transportation, you can simply drive from the Plaza Inter shopping mall towards the lake. Before you hit the lake, you will see the big buildings to your right.