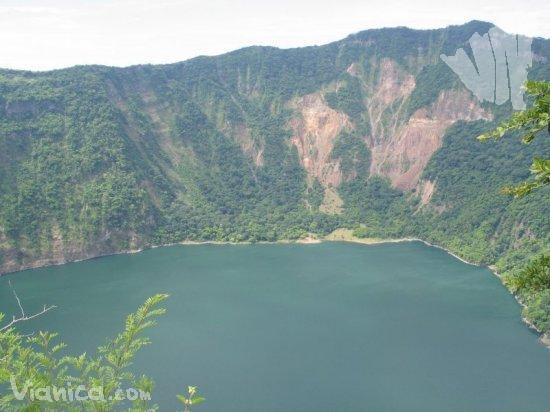 The most violent eruption in recent Nicaraguan history occurred January 22, 1835, at the Cosigüina Volcano. A huge part of the crater was blown away and some huge pieces of rock formed islands in the Gulf of Fonseca. Ash rained down in a huge area, reaching as far as Mexico City, 1400 kilometers away. The ash cloud blocked sunlight within a radius of 150 kilometers. After this short but brutal eruption there were only a couple other eruptions before the volcano became dormant in 1859. In 1938 a crater lake developed in the hole left after the eruption.

The Cosigüina Volcano is located in the utmost northwest corner of Nicaragua and has a height of 859 meters. Its stretched slopes are mostly covered with trees and run down almost to the Gulf of Fonseca. The volcano consequently does not appear to be a volcano, judging by its shape. It merely seems to be a long-stretched hill. The crater is not easily visible from down below.

Hiking to the crater, however, is not very hard. The slopes are not steep and the volcano provides some great views. There is a trail that starts at the office of MARENA at the bottom of the volcano. You will see nothing but trees, plants, butterflies, and a small trail leading to the top. The first part halfway up the volcano is also accessible by car. The abundant plants have mostly overgrown the path and scratches in the paint are hard to avoid, so make sure this does not matter for the car you are driving.

You will have to leave your car when halfway up the volcano. Here the vegetation gets to dense and you will have to hike. During your hike to the top you will pass a part with beautiful, big trees inhabited by birds and monkeys. The hike is friendly and tranquil, and not too steep. In around one and an half hour (from the place where you can leave the car) you will reach the top. It will not be until you are at the rim of the crater that you can see the actual crater.

The crater has a diameter of approximately 2 kilometers, and the crater lake is located at the bottom of this huge hole, at a depth of 500 meters. Descending to the lake is not an option, as the only path leading to the lake was destroyed when a strong earthquake hit the area in 2001 (this earthquake was even more devastating in El Salvador, where it originated).

Nevertheless, the crater and its lake are truly impressing seen from the top, and you will also have a superb view of the area. You can actually see El Salvador and Honduras at the other side of the Gulf of Fonseca. Including Nicaragua you will have a view of three countries from the top of this volcano!

Start hiking as early as possible because it will anyway get hot once the sun is fully shining. The volcano is located around 70 kilometers north of Chinandega. The preferred way of planning a hike to the Cosigüina is by staying at one of the few hotels located close to the volcano, who can arrange transportation and a guide. It takes around two and an half hours to get to these hotels from Chinandega. Fore more information on traveling times, check our transportation page. The Cosigüina is one of the least frequently visited volcanoes in Nicaragua due to its location, but it is a true beauty which has not yet been explored by many!

To get here, you must take a paved road that goes from the city of El Viejo to the community of El Congo. After that, there is a dirt road that will take you to the town of Potosí, located in the Northeast side of the Cosiguina Peninsula. It is recommended to drive a high clearance vehicle during the winter, but it is possible to reach this destination with low cars during summer.

There are also buses leaving from Chinandega and El Viejo to Potosí, but not frequently. We recommend to ask about schedules at the bus terminal or in nearby hotels.

We have 5 related tour(s) available that can be booked online.

View and compare all 5 related tours