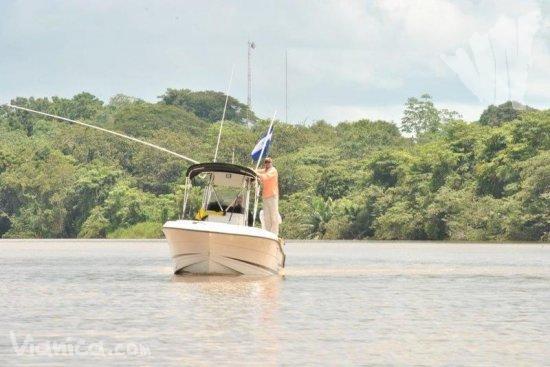 The Rio San Juan area is a unique sport fishing destination. Between Lake Nicaragua and the Caribbean Sea there is still a great quantity of fish, both fresh and salt water fish. This destination was a well-known in the 60s and 70s as a primer area for tarpon sport fishing. During the civil war, all sport fishing activity seized and only a few pioneer companies returned in the 90s. Consequently, the fish stock is in good shape.

In order to protect the important fish species, sport fishing in the entire area is strictly regulated. Catch and release is an absolute must for tarpon. For the other species there is a strict limitation on the number of fish that can be kept.

Below follows an overview of the fish that can be caught and the different sites and methods.
The salt water fish* include Tarpon 60-250lb+, Snook 5-50lb, Drums 2-6lb. *Fresh water fish include Bass, Tiger bass, Rainbow bass, Machaca, Tropical Gar, Aligator Gar.

The Río San Juan area is also known for the presence of now very rare Bull Sharks and Saw Fish. Both species are nowadays protected and fishing them is forbidden.

Considered to be one of the most sought-after sport fishing species, Tarpon (Megalops atlanticus) is one of the principal targets of many anglers. Being a strong fighter, catching one of the giant tarpons means one is in for a struggle. The largest fish caught here weighted around 300lb. Tarpon is found throughout the whole river and in Lake Nicaragua, throughout the year. On an average day an angler can expect some 10 bites, with 2-3 fish that are actually reeled in (and then released). Another great aspect for fishing is the flat water of the river. These year-round conditions make the Río San Juan region a unique tarpon-sportfishing destination. Light tackle can be used, and fly fishing is possible in certain areas. For fly fishing (blind casting), equipment size 12 (minimum), 13 or 14 (better) are used due to the size of the fish.

The rainbow bass (Parachromis dovii) is a smaller but similarly strong, aggressive fish. This species is found mostly in Lake Nicaragua. The Solentiname Archipelago provide very good fishing grounds. Conventional fishing or fly fishing (blind casting) are both options. The usual catch is 5-10lb. Using light tackle is commonplace, but 8lb is considered to be a minimum. Large quantities of other bass, machaca and mojaras can also be caught when fishing for rainbow bass.

Snook are caught mostly on conventional tackles in all Río San Juan. They are also found in Lake Nicaragua, near the Solentiname Islands. At least two snook species are found in the area. One is known as 'Calva', weighing 6-7lb, and is caught during the annual 'Calva Run' from October-January. The other species is known as 'Cola Amarilla', can weight almost 50lb, and is caught year-round.

The Río San Juan area is relatively unexplored by sport fishing enthusiasts. Fishing expeditions can be organized with specialized sport fishing companies, who offer all-inclusive packages, and half-day or full-day fishing trips. Important: there is strict regulation when it comes to sport fishing in the Río San Juan. Fishing can only done using an accredited boat and certified guides. Currently, more regulation is being drafted, including obligatory fishing licenses, and prohibiting tarpon fishing from May until July in order to protect the fish stock. Due to these strict rules, it is important to be well-informed and to only hire professional, reliable companies.

Be sure to bring protective clothing against both the sun and the rain. Food and drinks can be brought on the boat, but the fishing experience is certainly enriched when stopping for food and drinks along the river. In addition to hotels and restaurants at a few places, there are mainly small farms and communities next to the river. Having lunch or stopping for a drink while learning more about these people and their lives is often a great experience. Local operators know where to go.