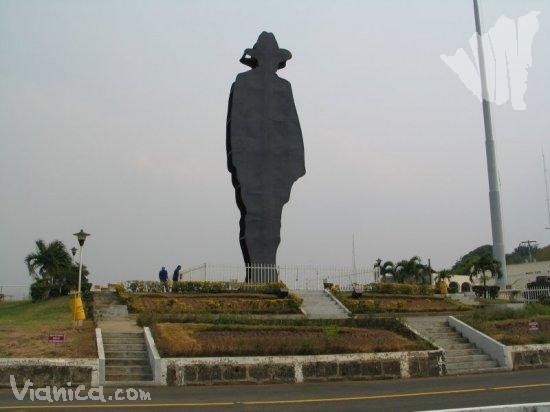 In addition to the canopy tour, the Tiscapa Historical National Park has more to offer. The site has an interesting history. More recently, the hilltop has housed the presidential palace for more than four decades. In addition, there were also prisons and torture rooms present that were used during the dictatorial regime of the Somoza family. The palace and some military installations were destroyed during the earthquake of 1972. After Somoza was ousted the site has served several purposes. A huge statue of General Augusto C. Sandino, which is visible from far, was also constructed.

Nowadays, the park is maintained by city of Managua and protected as a historical and cultural monument. You can walk around on the hilltop and see the ruins of the palace. There are also some historical objects to see (like a tank sent by Benito Mussolini to Anastasio Somoza). Furthermore, you can get a superb view of Managua. The stadium, the lake, shopping malls, and other significant buildings are easily visible as well as the landscape that surrounds Managua. Even if you don’t plan to do the canopy the Tiscapa Historical National Park is definitely worth a visit!

Tiscapa is ten minutes (in car) from the Metrocentro shopping mall, and only five minutes from the Plaza Inter shopping mall. The easiest way of getting there without your own vehicle is by taxi. The thousands of cheap taxis that cruise Managua will all know how to find Tiscapa.

If you are driving yourself go in the direction of the Plaza Inter shopping mall. Right behind it lays the (pyramid shaped) Crown Plaza hotel. The road that leads to the Tiscapa lagoon is next to the hotel.