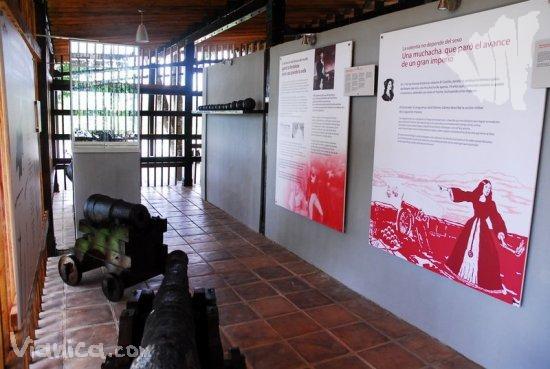 A small museum is located next to the fortress of El Castillo, where visitors can learn about this Spanish colonial fortification, the life of the indigenous during Pre-Columbian times and the unfinished plans to build a canal in the San Juan River.

In the past, the museum was located within the fortress, but it was recently moved to a structure that guarantees the conservation of the objects and information panels located inside it. Nowadays, this small museum has three areas where the history of this strategic zone is shown through photos and articles written in Spanish and English.

The first area describes the daily life of the indigenous that lived in the country before the arrival of Spanish conquerors. Here, visitors will find several objects such as 'metates' (grinding stones), ceramics, hunting weapons and ceremonial pieces that were part of the collection of the National Palace (Managua).

The second area shows the history of the fortress itself. In addition, visitors can read Rafaela Herrera's biography, known as the hero responsible of firing canons against British invaders who wanted to attack the town of El Castillo on July, 1762. Here, one can also observe some cannons and bullets, in addition to war weapons.

The third area displays the history of the ' Ruta del Transito', which was establish in the mid 18th century to connect the Pacific and the Atlantic Ocean, in order to assure the massive movement of travelers - from the East to the West coast of the US - looking for gold. Moreover, one can read about the unfinished plans to build a canal in the San Juan River. Also, there are old photos of town of Greytown (located between the mouth of the river and the Caribbean Sea) and pieces of steamboats.

Getting to: Fortress of El Castillo