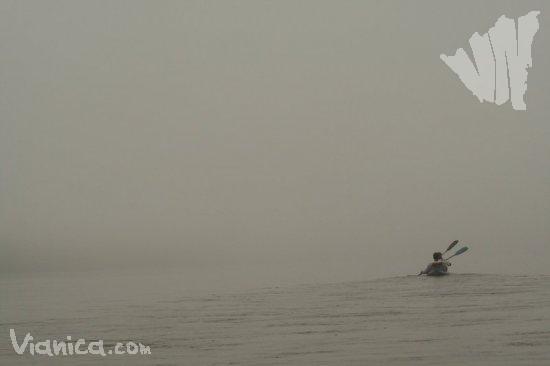 Starting at Sarapiqui, paddlers should consider leaving as early as possible. Not only because of the large distance, but also because there are manatees living in this section of the river. These large but shy animals are not easy to see, but one has the best shot early during the morning when they are actively feeding. MARENA officials stationed in this area even report seeing manatees playing in the water, jumping up and chasing each other. According to these reports, rainy weather early in the morning (5-6 AM) provides the best chance of seeing these animals. They do are rare animals, so chances remain slim and some luck will be needed.

An almost obligatory stop is the little shop half an hour paddling from Sarapiqui. Most boats traveling the river stop at this shop, and it offers a large variety of drinks, snacks, canned food, and other useful supplies. Payments in this Costa Rican shop can be made in córdobas, dollars, or colones.

Further down the river the Delta area begins. From here, the San Juan River starts to split into a variety of estuary streams that head down to the coast. Some end at Costa Rica, others within Nicaraguan territory. The main river continues down to the coast near San Juan del Norte, but due to all the splitups the river is significally less wide at this point. During dry season this is an area where boats often hit the sand and paddlers need to zigzag down the river to avoid getting stuck as well. This part of the river used to have more volume, but Costa Rican authorities dragged the downstream part on their side, which led to high water volumes leaving the San Juan River to reach the ocean on Costa Rican side. There are, however, government plans to also drag the final part of the San Juan River, in order to restore the original situation.

Starting after the Delta army checkpoint, houses can also be seen again on the left side of the river. This is a border-zone of the Indo Maíz Biological Reserve, and the government has permitted communities to live within certain limits on the border of the river. The forest is therefore not as close by as before, but there is still a wealth of wildlife in the area. Birds, lizards, and monkeys can all be seen within this final part of the river. Once close to the coast, the vegetation changes and there are mostly palms on the coast.

This long but impressive journey ends at the outlet of the San Juan River; at the point where the river meets the Caribbean Sea. Reaching this historic place is an achievement by itself, and even for paddlers who did not complete the journey from San Carlos, it is still a rewarding experience to reach this final point. The mouth of the river is not spectacularly big or impressive by itself, but seeing the ocean after so many hours – or days – of paddling is more than enough to make reaching this site worthwile.

From the river's outlet, it is only 20 minutes to reach the town of San Juan del Norte, located a bit upstream (in the direction of the Río Indio). Hotels, small shops, and even celular signal can all be found here. For visitors who like to stay a few days in this town – which is certainly recommended – there are a variety of options. Those who are still in for some kayaking, can visit several of them by paddling there! Click here to read more about the San Juan del Norte attractions.

You can read more about kayak options at the San Juan River here.