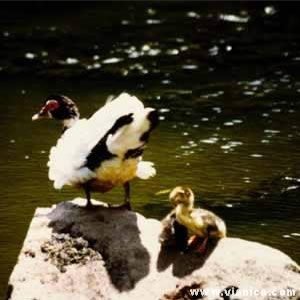 Adult male has fleshy red caruncles over eye and at crest; upper wing-coverts and entire undersurface of wing white (very conspicuous in flight). Female similar but much smaller, with no red on bill or face and no noticeable crest. Immature has much less white on wing.

Muscovies are frequently domesticated and kept at liberty by country people, so it is sometimes questionable whether or not a bird is truly feral. Wild birds are usually very wary, often a good distinction from captive ones. The species favors wooden swamps and rivers, and perches readily in trees.