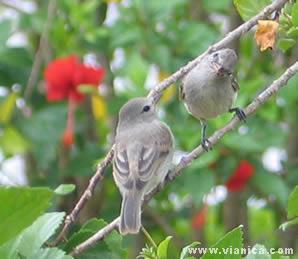 Closely resembles Southern Beardless-Tyrannulet. Difficult to distinguish on the basis of plumage, but presents an overall more faded, paler, and washed out appearance (with belly at most pale yellowish, instead of the pale clear of Southern).

Behavior of the Northern and Southern Beardless-Tyrannulet is very similar, as are their vocalizations. Northern's song is a series of four or five clear melancholy descending notes, while its call is a rather loud and sharp pee-yeép.