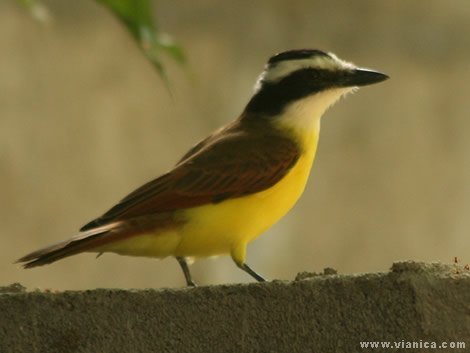 A large flycatcher, almost the size of a Boat-bill, and like that species with a heavy (but not as broad) bill. Brown above with much rufous on wings and tail; crown black with usually concealed yellow-orange crown patch, broad white superciliary that just meets at nape, and black earcoverts; throat white, remaining underparts yellow.

Fairly common to common but still rather local around habitations and in clearings and shrubby areas, especially near water.

An adaptable bird that will eat almost anything. Has a variety of loud characteristic calls, some of them buzzy. One of the most distinctive is reflected in its common name, kisk-a-deé; others include a geep and a ceekaw (the last resembling a call of the Squirrel Cuckoo).