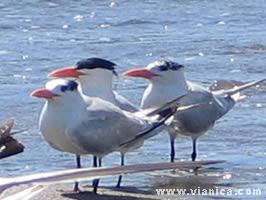 Feeds almost entirely by diving for small fish, often plunging down from considerable heights; they usually scatter out when foraging, but tend to gather in flocks when roosting at certain favored sites. Calls are shrill and sharp, a chirrik and a keeyr being most frequent.