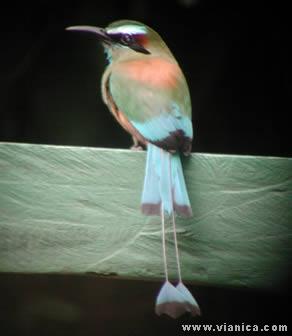 This strikingly beautiful motmot is Nicaragua's national bird. More often found in the open than other species. Mostly green above with conspicuous pale blue superciliary, black patch through eye and extending back onto lower cheeks, rufous area on back, and much blue in flight feathers; tail mostly turquoise blue, the terminal half of the large and conspicuous racquets black; mainly green below with large turquoise-bordered black patch on lower throat and upper chest, lower belly fulvous.

Often conspicuous and surprisingly confiding, regularly perching on fences or even phone wires, switching its tail from side to side. Oft-heard voice is very similar to Broad-billed Motmot's, a nasal far-carrying cwaw or cwaanh, sometimes repeated several times in succession.