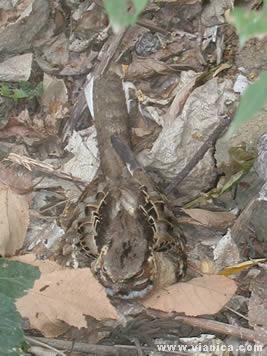 Rounded wings; rather long, rounded tail. Brownish above, mottled and spotted with dusky and buff; chin dusky, throat buff, remaining underparts buffy, finely barred with dusky; wings with broad white band across primaries; sides of tail mostly white (very prominent in flight). Female has narrower white wing-band and white in tail reduced to tipping. At rest wings extend only half the length of the tail.

Common in clearings, shrubby areas, and second-growth woodland in lowlands and foothills on both slopes.

Strictly nocturnal, this species' true abundance is best indicated during breeding season (February-May) when at night in proper habitat its calls may resound from all around. The typical call is a hoarse whe-wheéee-oo; this is sometimes slurred into a por-weéeeee or preceded by a series of bup notes; occasionally the bup notes are given alone in series. At nights comes out into more open areas, and then often seen resting on dirt or gravel roads, its bright orange-red eye reflecting car headlights from great distances; at such times it can sometimes be approached very closely. Infrequent encountered by day, usually as it flushes from the ground and flies off like a large moth.