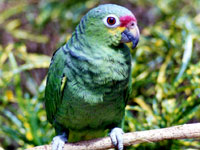 Fairly common to common and widespread in forest and more humid woodland (e.g. gallery woodlands) in lowlands and (in smaller numbers) in foothills.

Relatively catholic in its choice of habitat. As with other amazons, almost invariably seen in multiples of two (pairs), and most conspicious during their early morning and late afternoon flight periods, when they may pass high overhead. Large numbers (many hundreds) congregate at certain roosts, particularly in the nonbreeding season. Like the other amazons, flies with shallow stiff wing-strokes, obvious in the field and making the genus easy to recognize even if the various species often are not. The Red-lored's flight calls are very loud and harsh.