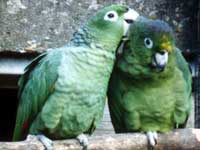 More strictly a forest bird than the Red-lored Amazon, though the two occur together widely; in extensively forested regions usually the commonest amazon. Only rarely is the Mealy found in gallery woodland in savanna areas, perhaps being the most seasonal here. Generally similar in behavior to other Amazons. Its very loud flight calls resemble those of the Red-lore, but can usually be recognized by the phrases chop-chop or cookyüp-kyüp, often repeated. When perched sometimes gives a variety of whistles and throaty gurgles.