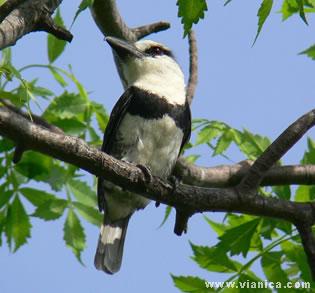 Usually seen perched rather high on an exposed branch. Often remains motionless for long periods, then flying off in pursuit of a large insect, which it captures with an audible snap, frequently then returning to its original perch where it kills its prey by beating it vigorously against the branch. Generally silent, but has a thing high twittery song, surprisingly weak considering the size of the bird.