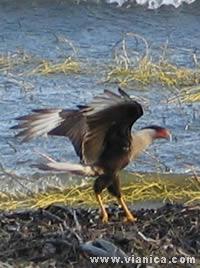 Rather long legs. Somewhat crested. Bare skin of face and base of bill red. Crown black; sides of head, neck, and throat whitish; otherwise blackish above; breast whitish barred with a dusky, becoming solid dusky on belly; rump and most of tail white narrowly barred with dusky and with broad black subterminal band; in flight shows conspicuous white patches on primaries. Immature recognizably similar though buffier and browner overall and more streaked below.

Like Yellow-headed Caracara, most common in cattle country. A rather powerful bird of prey whose food is not limited to carrion. Usually forages in pairs or small groups, often seen walking on the ground. Flies strongly but does not seem to soar.