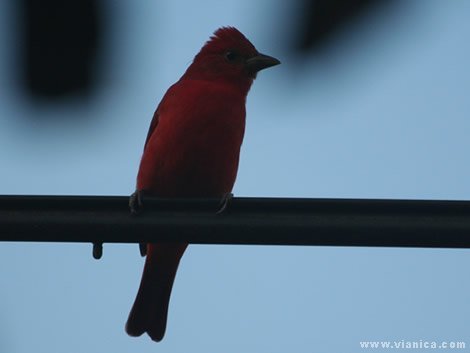 Bill usually dusky-horn in color, but somewhat variable (can be darker in presumed immatures). Adult male mostly rosy red, duskier on wings and tail. Female olive above with duskier wings and tail; yellow below. Immature male like female but tinged brownish red; some adult females are similarly tinged.

Common to very common transient and winter resident in shrubby areas, clearings with scattered trees, second-growth woodland, and forest borders throughout; most numerous in lowlands, particularly during northern winter months, but widespread as a transient.

Usually seen singly, foraging in the semiopen for insects, but small numbers may gather at a fruiting tree. Its distinctive call is often heard, a staccato pitichuck or pituck.