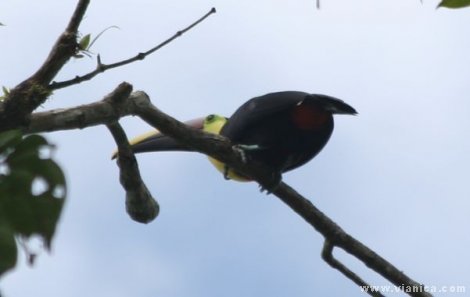 Usually seen in small groups high in trees, often perching fully in the open, especially in early morning and late afternoon. Keel-bills sometimes accompany Chestnut-mandibled Toucans, but more often alone. They look top-heavy in flight because of the long bill. Flight is undulating, with several rapid wingbeats followed by a descending glide on set wings, then more wingbeats to regain some attitude (though they usually seem to steadily lose attitude) - unmistakably a toucan, at any distance, though the two species can often not be distinguished when far away. They typical call is an endlessly repeated, grunting or coraking kre-ék, kre-ék, kre-ék..., the calling bird often bobbing its head or tossing it from side to side with each note. Also has other croaking or guttural calls.