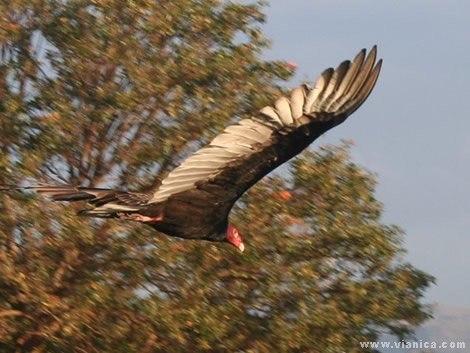 Black, with featherless head and neck reddish (blackish in young birds). The breeding race (ruficollis) has several narrow dull yellow bands across back of neck (may look like a pale patch at a distance). Soars with wings held slightly above the horizontal; from below contrast between black under wing-coverts and silvery gray flight feathers is apparent.

More widespread than Black Vulture, but less numerous around towns and cities. Less gregarious (except on migration) than Black Vulture. A masterful flier, soaring for long periods with a flap, tilting from side to side to take advantage of every favorable air current.