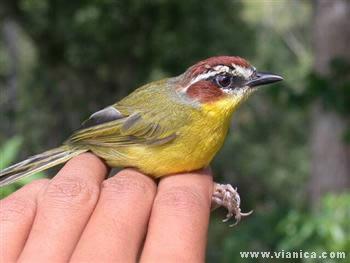 Usually found in thickets not far above ground. Often cocks tail in a perky manner. Its song is a fast, dry chit-cha-chup-cha-chu weep, sometimes ending with a chee-weecha, in pattern reminiscent of a Canada Warbler but in quality rather more like a Chestnut-sided or Yellow.