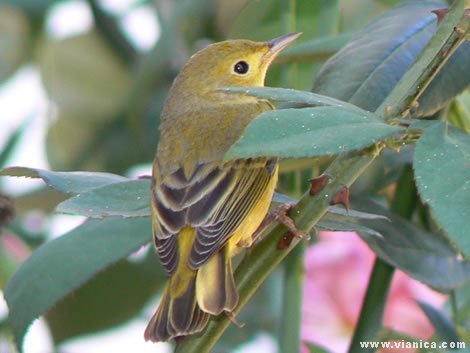 Includes both North American migrant forms (the true "Yellow Warbler"), and resident forms (the "Mangrove Warbler"). Male "Yellow" mostly yellow, more olive on back; wings and tail dusky, wings with yellow edging, tail with yellow patches on inner webs (conspicuous in flight); breast and flanks with variable amount of chestnut streaking. Female similar but duller overall, with chestnut streaking faint or absent; immatures are even drabber and more olive generally. Male "Mangrove" has entire head, throat, and chest rufous-chestnut. Female "Mangrove" resembles migratory females, but often is more grayish above and whitish below; this tendency is even more pronounced in immatures, which are often quite dingy and grayish, showing little or no yellow or even olive.

Migrants are numerous, familiar, and widespread in nonforested localities. Residents behave in a generally similar way (and the two often occur together during northern winter months), but are much more restricted in habitat. Male "Mangroves" have a bright lively song, rather variable but often consisting of a fast series of its tsit call notes with an emphasized terminal note (the effect being rather different from the song of northern birds).