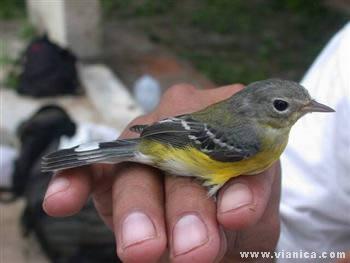 Nonbreeding plumage: olive green above with grayish head and white eye-ring, two white wing-bars, and broad white band across middle of tail (lacking on middle pair of feathers), rump patch yellow; mostly yellow below with a little black streaking on sides and flanks, and usually a grayish band across chest. Breeding plumage much brighter (especially in male): bluish gray above with black face patch and back (latter streaked with olive in female); bright yellow below with heavy black streaking except on throat.