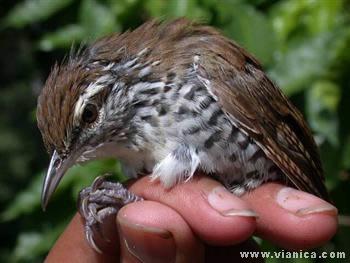 Mostly rufous brown above with narrow white superciliary, wings and tail barred with black; white below, coarsely barred with black on sides, flanks, and crissum. No other similar wren has such bold black markings on its lower underparts. Fairly common to common in scrub and thickets.

A typical Thryothorus wren in behavior, usually in pairs and often rather skulking and difficult to see, tending to remain within thick cover. Has an exceptionally rich, complex, and musical song consisting of a series of repeated whistled notes or short phrases on varying pitches and with varying strengths; the Banded Wren is considered by many to be among the best singers in a vocally gifted genus.