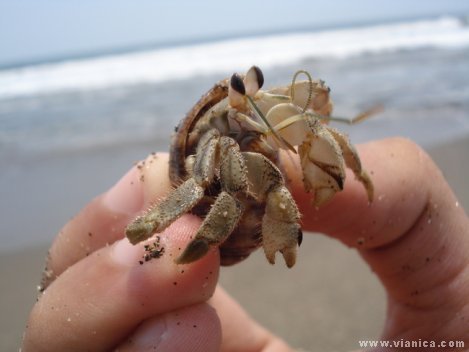 Hermit crabs are decapod crustaceans of the superfamily Paguroidea. They are not closely related to true crabs. Hermit crabs are quite commonly seen in the intertidal zone, for example in tide pools.

Most species of hermit crabs have long soft abdomens which are protected from predators by the adaptation of carrying around a salvaged empty seashell, into which the whole crab's body can retract. Most frequently hermit crabs utilize the shells of sea snails, marine gastropod mollusks. The tip of the hermit crab's abdomen is adapted to clasp strongly onto the columella of the snail shell. As the hermit crab grows in size, it has to find a larger shell and abandon the previous one.

This habit of living in a second hand shell is what gave rise to the popular name "hermit crab", which is a reference to the idea of a hermit living alone in a small cave.

Lives on both the Pacific and Atlantic coasts of Nicaragua, possibly feeding off the algae that grow on the coasts' rocks.