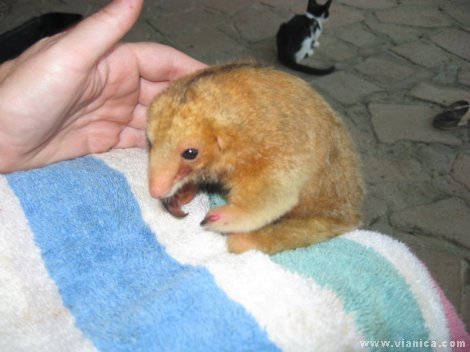 It is the smallest member of the anteaters, with total length ranging from 360 to 450 mm (14.1-17.7 in) and usually weighing less than 400 g (0.88 lbs). It has a dense and soft golden brown fur, short snout, partially prehensile tail and two very enlarged claws in each forepaw.

It is a nocturnal and arboreal animal, found in lowland rainforests with continuous canopy where they can move to different places without the need to descend from trees. It can occur at fairly high densities of 0.77 individuals/ha, for example, in some areas. Females have smaller home ranges than males.

Some authors suggest that the Silky Anteater usually dwells in silk cotton trees (genus Ceiba). Because of its resemblance to the seed pod fibers of these trees, it can use the trees as camouflage and avoid attacks of predators such as hawks and, especially, harpy eagles. During the day they typically sleep curled up in a ball. Although they are rarely seen in the forest, it is said that they can be found more easily when they are foraging on lianas at night.

The Silky Anteater is a slow moving animal and feeds mainly on ants, between 100 and 8000 a day. Sometimes it can also feed on other insects, such as termites and small coccinellid beetles. The Silky Anteater defecates once a day. Some of those feces, examined by scientists, showed a large quantity of exoskeleton fragments of insects, indicating that the Silky Anteater does not possess either chitinase or chitobiase, digestive enzymes found in insectivorous bats.

It is a solitary animal and gives birth to a single young that is usually placed inside a nest of dead leaves built in tree holes.

When threatened, the Silky Anteater, like other anteaters, defends itself by standing on its hind legs and holding its forefeet close to its face so it can strike any animal that tries to get close with its sharp claws.