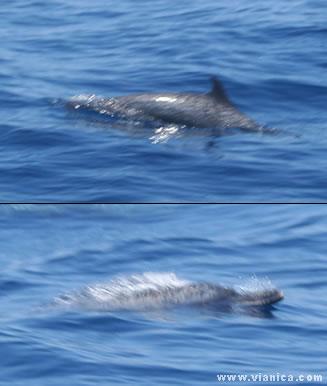 The Bottlenose Dolphin is gray, varying from dark gray at the top near the dorsal fin to very light gray and almost white at the underside. This makes it hard to see, both from above and below, when swimming. Its elongated upper and lower jaws form what is called a rostrum, or beak-like snout, which gives the animal its common name, the Bottlenose dolphin. The real, functional nose is the blowhole on top of its head; in fact the nasal septum is visible when the blowhole is open.

Adults range in length from 2 to 4 meters (6 to 13 ft) and in weight from 150 to 650 kilograms (330 to 1430 lb)[2] with males being on average slightly longer and considerably heavier than females; however, in most parts of the world the adult's length is about 2.5 m (8 ft) with weight ranges from 200 to 300 kg (440 to 660 lb). The size of a dolphin appears to vary considerably with habitat. Those dolphins in warmer, shallower waters tend to have a smaller body than their cousins in cooler pelagic waters.

Bottlenose Dolphins can be found both at the Pacific and Atlantic side of Nicaragua.