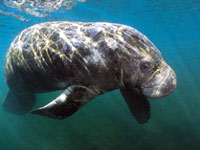 Like other manatees, the West Indian Manatee has adapted fully to an aquatic life style, having no hind limbs. Pelage cover is sparsely distributed across the body, which many play a role in reducing the build-up of algae on the skin. The average West Indian Manatee is approximately 3 meters long, and weighs between 400 and 600 kg, with females generally larger than males. The largest individuals can weigh up to 1,500 kg. The Manatee's color is gray or brown.

The West Indian Manatee is surprisingly agile in water, and individuals have been seen doing rolls, somersaults, and even swimming upside-down. Manatees are not territorial and do not have complex predator avoidance behavior, as they have evolved in areas without natural predators.

The West Indian Manatee is an opportunistic feeder, with large adults feasting on nearly 100 kg of sea grasses and plant leaves daily. Because manatees feed on abrasive plants, their molars are often worn down and are continually replaced throughout life. They are also known to eat invertebrates and fish.