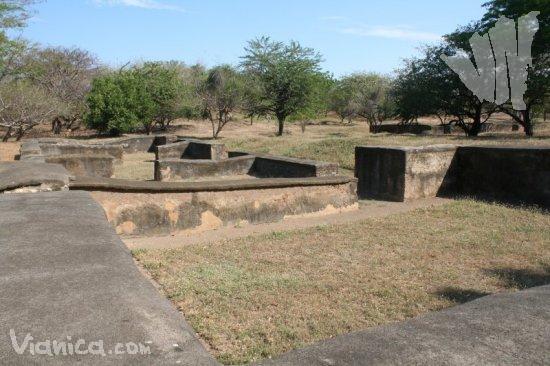 What is left of the second oldest city of Nicaragua is nothing but ruins. León was established in 1524, and was one of the most important cities of the region. Gold from Nicaragua and other countries was traded in León, and there were quite some rich merchants living here.

The city was built close to Lake Managua (Xolotlán) and the Momotombo volcano. When the Momotombo erupted in 1610 the inhabitants rapidly left the city in fear of the volcano. A new León was built some 30 kilometers to the west, where it still is today. The old León, or León Viejo as it is locally called, was never actually destroyed by the volcano and preserved beneath the surface. The real excavations began in 1999.

What you can see at León Viejo are the foundations of the houses, as well as some partially restored important buildings, like the church. The Spanish conqueror who established the city, Francisco Hernández de Córdoba, was murdered by Pedrarias Davila here as well, and his beheaded body has been found next to the body of his murderer. You can see the cellar where they were found, as well as a statue of Hernandez de Cordoba holding his remains and other bodies found, beneath the statue.

The ruins of León Viejo have been listed as UNESCO world heritage site in 2000. The park is well set up and you will get a guide who will show you around. There are many signboards that tell something about the history of the city. You can also walk up a hill from where you have a great view of the lake, the Momotombo volcano, and the other volcanoes surrounding the city.

During the dry season, there can be abundant wasps in León Viejo. Bring some repellent or – probably more effective – wear a long sleeve sweater and pants.

You can get to León Viejo by taking the bus to La Paz Centro. This town is located on the highway between Managua and León, and easily reachable. From there, buses leave to León Viejo.

If you are driving your own car, you have to take a right just before La Paz Centro (you will see a big sign). Just keep following the signs. The road is not completely paved but in good condition. It takes about 20 minutes from La Paz Centro to León Viejo.