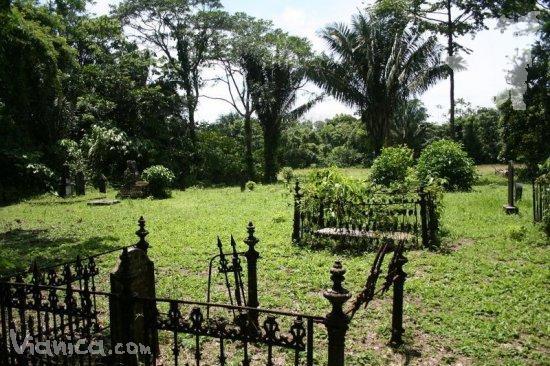 The colonial city of Greytown was several hundreds of years old and it had experienced a time of prosperity and a subsequent period of downfall before it got burned to the ground during the war in the 1980’s. Only a few traces are left of its rich past, and most of these are found at the area where the original town was located.

The site that formed the stage for the bustling city of the 19th-century Greytown it nowadays not much more than a green field where vegetation has overgrown whatever was left of the city. All of the wooden buildings were destroyed by the fires, and the only area that was saved was the town’s colonial graveyard

Every social group had its own cemetery in Greytown, and there are four small cemeteries located next to each other. The British had a cemetery, just as the militaries, the Catholics, and the Freemasons.

The graveyards are partially overgrown by grass and plants, but many tombstones are still clearly visible. Captains, pursers, diplomats, and other inhabitants of this town are all buried here, and walking around at this historical site that is surrounded by forest is surely an interesting experience.

There is an open, grassy area right next to the cemeteries, which was the former main street of the city. The sidewalk can still be seen below the grass at some places, and when walking down the former main street some other traces can be seen: the foundation of some buildings and an old windmill. The grassy strip now functions as a landing site for small, private planes that sometimes visit the area.

The cemeteries of Greytown can be easily visited from San Juan del Norte. It’s a ten-minute boat ride from the town and such a trip can be perfectly combined with a visit to some of the other attractions in the region. Before reaching Greytown, the old dredge in the bay can be seen: the last reminder of the plan to construct an inter-oceanic canal. The outlet of the San Juan River is also close by, and the Blue Lagoon is also frequently visited during such a trip.