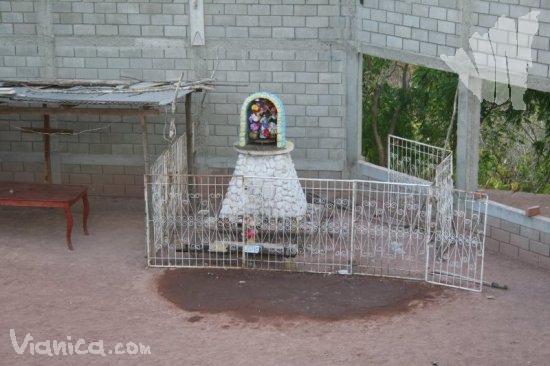 In 1990, in the rural community of Cacaulí, a 13 year old boy known as Panchito was collecting firewood when an event occurred that would change his life and the place where he was walking. Panchito reported observing the Virgin Mary, which was something he shared so convinced and passionately that all people in town trusted his words.

The history became known throughout the department of Madriz, and next throughout Nicaragua, and has nowadays even passed national borders. The place where it happened is known as the Sanctuary of Cacaulí, and every eighth day of the month thousands of Nicaraguans as well as foreign visitors assist this place in search for miracles from the Virgin Mary.

The people start their pilgrimage on the seventh day to hold a vigil. The next day more people come in and the vicar from Somoto holds a field mass at 10:00 AM. Then, Panchito shares his story with the crowd, and other people relate about miracles that happened to them. According to locals, on certain days more than 15,000 people from a wide variety of origin and social class have gathered here.

A peripheral wall has been set up around the sanctuary, and a humble Virgin Mary alter has been created. Besides the seventh and eighth day of the month Cacaulí remains calm with only a few visitors dropping by. Many people look for Panchito (who is now an adult, and his full name is Francisco Tercero Dávila) in his house in Somoto, and ask him to accompany them to the sanctuary.

To reach the Sanctuary of Cacaulí take the first exit to Cacaulí on the road between Estelí and Somoto, right after a Shell gas station. A dirt road follows for 1½ km, and the small road leading to the sanctuary is not easily found without help as there is no signage at the moment so be sure to ask people from the area.