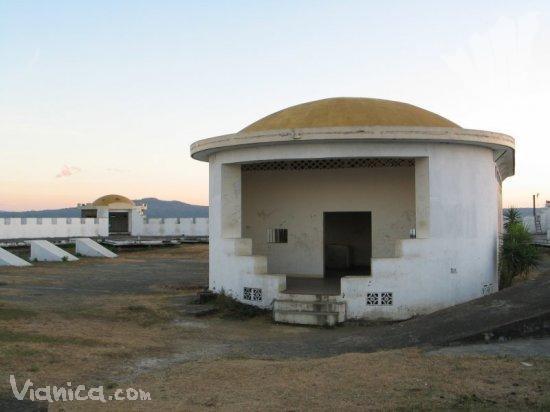 In 1893 president Zelaya built a big fortress on top of one of the most strategic hills, close to Masaya. This fortress was named Fortaleza El Coyotepe, and allowed his troops to easily observe enemies – mainly North American armies who tried to take Masaya – and protect the land.

During the dictatorial regime of the Somoza family a dungeon was constructed below the fortress. The dungeon served as a prison for political enemies, and housed at times more than 800 people who lived there under terrible conditions. The prisons had barely any light (some of the prisons actually had no light whatsoever), and were packed with people. Torture rooms were also found.

The Sandinistas also used the fortress as a prison before it was handed over to the Boy Scouts. They used it for their annual jamboree. It nowadays still belongs to the Boy Scouts, who have opened the fortress for visitors. You can walk around in the dungeons, get a tour and hear about the battles that were fought here. The dungeons have been spray-painted with graffiti but that doesn’t make it less creepy to walk in the dark halls and get an idea how the hundreds of prisoners must have lived here.

From El Coyotepe fortress you can see the city of Masaya, its lagoon, the Masaya volcano, Lake Managua and Lake Nicaragua, and the Mombacho volcano. You can climb the four little towers to enjoy this superb panoramic view.

There is a small entrance fee, which already includes a guided tour.

To get there, you can take a taxi from Masaya who will bring you here. In your own car you can just look for a big hill next to the road (km. 28 Carretera Masaya). It’s on your right when you come from Masaya. There is an entrance at the foot of the hill.