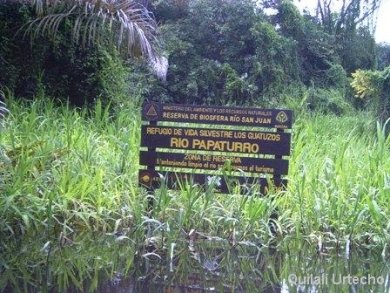 Los Guatuzos Wildlife Refuge is an wide swathe of territory, occupied by forests and wetlands. It is located in the South of Lake Nicaragua and is home of an important ecosystem, which was declared a Ramsar site back in 1997. This is the ideal destination to have direct contact with nature. In addition, it offers other activities such as hiking, birdwatching, walks on a suspension bridge, and others.

This natural reserve has an extension of 437 square kilometers and is located in San Carlos, in the department of Río San Juan. It covers an area between a portion of the South shore of Lake Nicaragua and the borderline with Costa Rica. Its East border is the Medio Queso river and the West border is Río Pizote. In its interiors there is an extensive network of rivers, creeks and small lagoons. This makes the reserve a very important humid zone.

The nature of Los Guatuzos

Los Guatuzos is a territory occupied mainly by the tropical rainforest. Here, the wetland ecosystem is the predominant due to the 18 rivers, creeks and small lagoons located in it. The land is usually flooded during the rainy season and becomes an inhospitable territory, where only few communities manage to live.

In addition to the great quantity of species of orchids, there are a great number of tree species and plants. It is very common to find high tress as the Poponjoche, Oaks, and others. The vegetation of the swamp is abundant in the area.

The fauna inhabiting at Los Guatuzos is also varied and interesting. There are a lot of big mammals such as jaguars, panthers, families of howler monkeys and white faced monkeys. There are also water turtles, iguanas, snakes, lizards and other animal species.

The attractiveness of the area is constituted by the birds. This reserve is the shelter of approximately 400 hundred species of birds. Herons, ducks, parrots, hawks, and others, can be found here.

The reserve is named after the community of Los Guatuzos, an indigenous tribe that lived here and disappeared. It was the first national wetland to become a Ramsar site (No. 915), in 1997. Ramsar (an Iranian city) is an international treaty for the environmental protection of the wetlands.

The refuge is frequently visited by national and foreigners, who are developing studies on the flora and fauna of the area, or by nature lovers. There is little infrastructure for visitors, however, there are some lodging options that can be taken into account. The most important of all is the community of Papaturro, where the is an ecological center with rooms, food and entertainment activities. Another similar option is the Esperanza Verde Natural Reserve, which is also part of Los Guatuzos.

Furthermore, two breeding places are located in the Papaturro community. One with fresh water turtles and the other one with caymans. There are also more than 110 species of orchids in the reserve. Other interesting activities are the walks on the trails, the kayak tours on the rivers and a tour to the 180 meters hanging bridge.

Tourists can get to Los Guatuzos from San Carlos (by water). Small boats depart from this city to Papaturro or Esperanza Verde community. The trip to Papaturro takes 3 1/2 hours and costs C$100 (one way). The boats leave on Mondays, Tuesdays and Thursdays.

It is also possible to get to Papaturro by land, from Costa Rica. First, it is necessary to go to Peñas Blancas, and on the Costa Rican side, take a stone path which runs parallel to the border until reaching the Upala community. Once travelers get there, they need look for the entrance of the road to Papaturro. It is recommended to ask people about how to get to the community, because tourists might not find the proper signs.