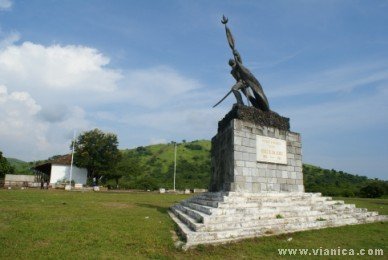 The farm where, in 1856, a national and patriotic battalion fought and defeated a group of foreigner invaders which were stronger in number and weapons, is now a historic tourism site that offers activities such as expositions in a museum, walks to a hill and observation of monuments.

History says that the farm was attacked during the morning of September 14, 1856. The invaders were American filibusters, members of the mercenary army of William Walker, who was trying to take Nicaragua by force. The defenders were members of the national army, in addition to troops from an indigenous battalion of Matagalpa.

Despite the brave defense, the battle went wrong when Nicaraguans started losing positions. However, a particular event caused an unexpected twist: the horses of the farm - located in a barn on top of a hill behind the hacienda - were released and leaded to the place of the battle. When the invaders heard the trot, the attackers thought more people would come and so, they withdrew.

Click here to read more about the Independence of Nicaragua.

The museum is located in an antique hacienda, which was restored and well maintained. It is divided in three salons, each of them displaying different expositions following this order:

The exhibitions room: it is the widest of all and shows some of the rifles of the battle, as well as a couple of layouts showing the orientation of the invader's attack and the positioning of the national defenders. There are also photos of people from those times, among other interesting artifacts.

The next room shows the National Symbols. It includes all the Nicaraguan flags established after the independence - until the current one - in addition to an enlarged copy of the national hymn's lyrics written by its author.

The hill were the horses were released can also be visited by tourists. It is not that high and the top can be reached after a short walk. From there, one can observe the landscape. Also, there are some monuments dedicated to the national fighters and the Central American republics, situated around the house.

This historical site is administrated by the Nicaraguan Institute of Culture. There's always a guide available, or two during September (independence holidays). A small entrance free is charged at the entrance; these funds are used to maintain the place:

The San Jacinto Hacienda is situated in the East zone of the department of Managua, between the cities of San Benito and Las Maderas. Tourists get to the place taking the Panamerican Highway, where a concrete statue of Andrés Castro - one of the heroes of the battle - indicates the entrance to the hacienda. From there, visitors have to drive three kilometers until reaching the gate of the hacienda. The road is in good conditions and a part of it is not paved.