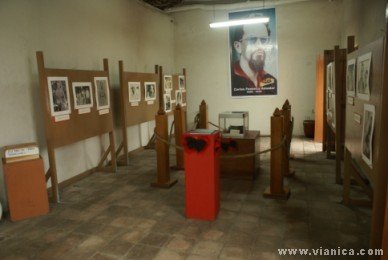 The birthplace and childhood home of Carlos Fonseca Amador (1936-1976), a young idealist from Matagalpa who was the founder and top leader of the guerrilla movement Frente Sandinista de Liberación Nacional - which fought against the dictatorship of Anastacio Somoza, is now a museum that displays information about this character of the Nicaraguan history.

This small and simple house, made of taquezal (mud and wood), is located in a corner, one block away from the Darío Park. The interior is distributed into two exhibition rooms, one small office and a salon that will be a library in the near future.

The rooms have a photo exhibition about Carlos Fonseca, showing images of different stages of his life, as well as important people from it. His childhood and family, his revolutionary activism in different countries, guerrilla partners, and more. Also, there are old news clippings, including one about his death in the war against the Guardia Nacional (Somoza's army). Some personal artifacts can also be seen here.

The original images and pictures of the exhibition are being restored. They were shown during 80's and 90's. After that, the museum was closed and opened again in 2008.

The entrance to the establishment is for free. There is also a guide available.

From the Southwest corner of Parque Dario, go 1 block South.