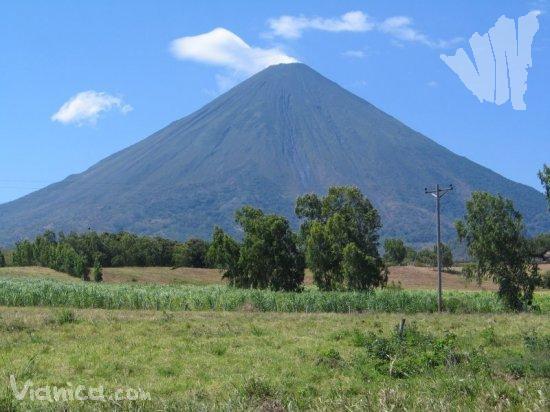 The Concepción is a near perfect cone-shaped volcano. It is the biggest on Ometepe, with a height of 1,610 meters. The volcano is still active. Smoke is coming out of its crater, and there are other fumaroles on the volcano’s slope as well.

You’ll need a lot of energy, stamina, and you should be in good condition to climb the Concepción. It is one of the toughest climbs in Nicaragua. The slopes are very steep and the volcano is one of the highest in Nicaragua. The bottom part of the volcano is covered in trees. You will first walk through plantain and banana plantations. Halfway, there is a dense, humid forest. Vegetation becomes less dense and less tall more to the top.

Big and smaller rocks do not provide an easy path to the top. You will sometimes be climbing your way to the top, and once descending you will have to continuously pay attention where you put your feet. In addition, rain and humidity can make the rocks slippery and add another difficulty to the hike.

No not envision yourself sunbathing at the top of this mighty volcano. The crater is often covered in clouds and the weather conditions at the top are not very inviting. Your clothes will be soaked at this point, due to sweating and humidity, and a very strong, chilly wind that blows continuously will force you to descent as soon as possible.

Nevertheless, your efforts and the hardship you have to endure will be rewarded. At the first place ascending such a giant volcano is quite an achievement. In addition, standing at the rim of the crater of this volcano is a truly unique experience. The cold wind chilling your body will be countered by the hot smoke that is emitted by the crater. You will feel the heat of the volcano as well as the coldness of the wind. Odd plants growing around the crater only add to the unique atmoshpere.

If you are very lucky to be at the top when there are no clouds, you will have a magnificent view of Ometepe, Lake Nicaragua, and the main land. Nevertheless, the views when descending are quite spectacular as well.

Ascending and descending the Concepción will take between seven and ten hours. You should therefore bring enough water and food, and prepare well. A dry shirt or jacket can help too. Leave early (preferable at sunrise) so you return on time. You have to hire a guide, which can be arranged by your hotel.