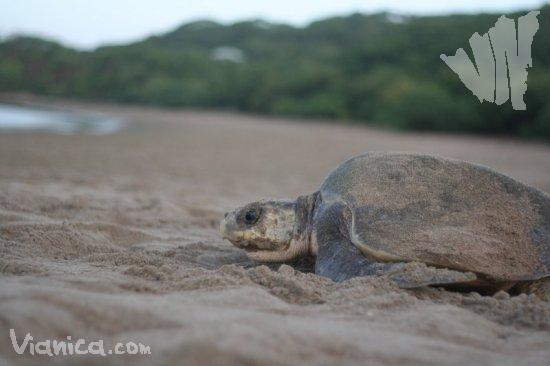 La Flor beach is a sanctuary of nature. Nicaragua is blessed with several beaches where the Olive Ridley turtles come to lay there eggs. These sea turtles weigh about 45 kg and are spread throughout the world. There are nesting sites in Asia and Africa as well, but despite this dispersion the Olive Ridley population is threatened and in some places endangered with extinction. In Nicaragua there is a fairly big population, but egg harvesting and destruction of nesting sites is having an impact on this population.

The Olive Ridley turtles come to the beach en masse, during so called arribadas in which thousands of turtles arrive at the same time to lay their eggs. This way, the hatchlings will swarm the beach in huge numbers and in doing so they increase their chance of survival.

Wildlife Reserve La Flor measures more than 3,000 hectares and is located 22 kilometers south of San Juan del Sur. It is one of the places in Nicaragua where you can observe the arribadas of Olive Ridley turtles. You can do more than just wantch the arribadas during the respective season. The area offers many sites and scenarios where you can see, at any time of year, marine life, land animals, insects, streams: for more on this, read here down our Activity "Hicking at the La Flor Beach". You can also view a profile of this place as "Nicaraguan beach" on this link: Playa La Flor.

Seven massive arribadas occur each year, all taking place between July and January. Many other smaller turtle arrivals will also take place during that same time frame. The moon influences the arrivals, but it is never exactly predictable when the turtles will come.

After arriving at the beach, the turtles look for a decent place to lay their eggs. After digging a hole the turtles start laying their small, white eggs. About 100 eggs are deposited in the hole, which is then covered up by the turtle. After this impressing job the turtles slowly make their way back to the water. The arribadas take a couple days, during which thousands of turtles visit La Flor.

About 50 days later the eggs hatch. Thousands of tiny, dark hatchlings emerge all of a sudden from the sand and crawl towards the ocean. After escaping from the first predators on the beach the small creatures encounter fish waiting in the shallow waters to enjoy an easy meal. The start of a turtle life is not easy! The vast numbers in which they swarm the beach make it possible for some of them to get through and grow into an adult turtle.

There is an entrance fee to the refuge:

There are discounts for groups, should be consulted directly with the reserve manager.

To get to La Flor, you need to go south from San Juan del Sur (150 km from Managua). Take to road in the direction of El Ostional. You will hit a dirt road after about 18 kilometers, which is fairly good but a high clearance vehicle is recommended. From there, there are signs that guide you to the La Flor beach. A high-clearance vehicle is necessary during the raining season to cross the small rivers.

It is also possible to get there by public transportation. You only need to find a bus heading to El Ostional at the municipal market of San Juan del Sur. All the buses pass by the entrance of the reserve. From there, you will have to walk for a bit in order to get to the beach. There is a sign at the entrance, but it is also recommended to ask the bus driver to leave you at the reserve.