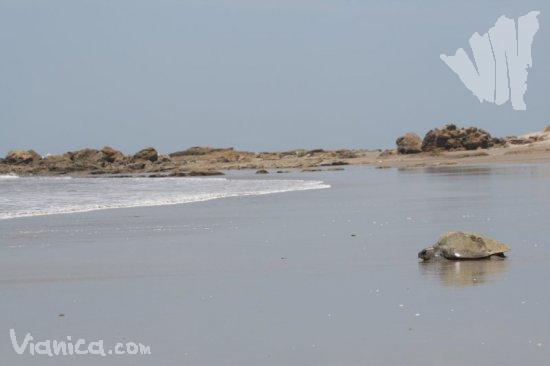 Besides of being one of the majors reserves of dry tropical forest in the country, and therefore an habitat of great variety of flora and fauna common of this natural environment, the Wildlife Reserve Río Escalante-Chacocente is one of the few sites in the world in which shores are produced the paslama turtles massive arrivals: each year, in certain seasons, hundreds of female turtles come to spawn on the sand during these “arrivals”, which can last more than three consecutive days.

Throughout the year at the refugio – populary known just as “Chacocente”- is possible to camp, walk across its beaches and trails, observe plants, flowers, trees, insects, birds and some other animals, as well as buy local food services. All of this, thanks to the facilities that the local rural communities and the Biological Station of Touristic Services at Refugio de Vida Silvestre Río Escalante-Chacocente (COSERTUCHACO) offer.

The park rangers and locals offer guide services to diverse interesting points of the reserve. More than many beach areas with a silvester state, the tourist can travel across trails surrounded by plants, animals in their natural state or even through areas with agricultural production activities. There is also horseback riding tours.

A few appealing sites are the Tres Sombreros viewpont, where the visitor can have a wide sight of the coast and the reserve area; El Guapinol viewpoint, that offers similar scenarios; waterfalls, ojos de agua or “spring of water” and thermal waters. Read below a list with current prices of the different services offered in the shelter.

The turtles that get to the shore to spawn are mostly Paslama, and a lowest number of Carey, Tora and Torita turtles. The nesting of little groups or even lonley female turtles happen during the respective seasons, along 11 km of coastline. The Paslama masive arrivals, however, occurs in a specific coast segment of half kilometer long.

Each year, the arrivals season begins in July and ends in December. Is not possible to know an exact arrivals occurrence date, nevertheless, it has been easy to determine that they occurred mostly during new moon or waning moon, and specially at night. Neither is easy to know how many arrivals are going to be produced by season, but a couple of big arrivals or some less numerous are always expected.

The show is remarkable: Suddenly, the beach sand commence to filled with dozens, hundreds and millions of female paslama turtles coming from the sea. Gradually the turtles come out crawiling and each one search for a specific point in the beach to start diging using their hind flippers. In that hole they spawn around a hundred eggs, which later are buried by adding the sand again. Then, with the same slow step, they come back to the sea and disappear in the water.

In Chacocente the most numerous arrivals tend to reach 18,000 female turtles and last at least 4 days and 3 days. The moment is protected and monitored by park rangers, with locals and some militars of the Fourth South Command and Naval Force support. The protection is indispensable due the eggs looters, that take and sell the eggs in some towns where they are consumed as a special dish. Although the consume is decreasing, it still enhance thiefs interest.

Another spectacular moment in this natural phenomenon is the birth of millions of little turtles in each arrival. The Paslama turtle incubation period is between 45 to 50 days, so after every arrival it can be appreciated the hatching of 100,000 eggs and some millions of young turtles moving vigorously and clumsily to the sea. To reduce the predators action or the nests destruction by other turtles that come to spawn, there are nurseries where the nests are translated and guarded until birth.

Mainly, the Tora and Torita turtles nestings are produced at the refuge North beaches, nevertheless, along with the Carey, there are less turtles that comes to spawn, for that reason is considered that these species are in a critical state within the shelter parameters. All the species are nice to watch, but the Tora takes all the attention for its size.

The Wildlife Refuge Escalante River-Chacocente was declared as such in 1983, due to its forest, biodiversity and, of course, to the mass nesting of sea turtles. The core area has an extension of 4.645 hectares (46.45 km2), and is shared by several private properties, rural communities and 3.49 hectares belongs to the State. The major part of its territory is located within the municipality of Santa Teresa (Carazo), although there are also small areas of land in Jinotepe (Carazo) and Tola (Rivas). Its name is composed of the two most prominent geographical points of the area: the River Escalante and Chacocente beach (area of arribadas).

Its geography features a long coastline with hills that inland, become valleys circulated by streams in the rainy season. In spite of the continuing problems of illegal logging, the forest is still preserved in some part of the core zone, where can be appreciated: mahogany, cedar, oak, laurel, cornizuelo, black Madero trees and even a mangrove area. Pinuela, is a predominant plant specie, however, there is an enormous diversity of plants and flowers species.

In this natural zone live several herds of congo monkeys, and according to the people of MARENA, there are also spider and carablanca monkeys. The deers, squirrels, rabbits, the constrictors boas, garrobos, armadillos; toucans, magpies, pelicans, guardabarrancos, chocoyos... all these and more live here; also, migratory species arrive at the site, especially birds

Everything is rustic Chacocente, if what you want is luxury, this is not the place for you. Here, the services are offered to provide comfort for the tourist, but in complete harmony with the natural environment and the rural area. In addition to the possibilities of camping or spending the night at the biological station and the communities, it may be possible to obtain the services of supply (local food), horseback riding tours or guided walks to different interesting points of the refuge.

There is a permanent entrance fee to Chacocente Beach, as well as for the right of camping, which is paid directly to MARENA. Then, there are services that are offered by the community in the area. You can call them at (505) 8603 3742 and (505) 8481 1202. We show you a list with the current amounts of the COSERTUCHACO cooperative:

Entrance to the Biological Station and beach Chacocente:

Accommodation in communities or biological station:

Meals at the MARENA biological station:

There are 2 main routes to the refuge, one from Carazo and another from Rivas. The roads for entering the area are rural, and even during the rainy period they can become difficult to transit, therefore it is recomended to travel in a high vehicle with double haulage.

Furthermore, there are no possibilities of public transportation towards the refuge, however, from the cities of Jinotepe and Santa Teresa it is possible to request the transport service offered by the local cooperative. Also, it is possible to come from the Rivas area up to El Astillero in public bus transport; and from El Astillero is easy to reach the beach Chacocente by foot.

These are the two ways for accesing to the area in own transport:

Via Carazo: The first thing will be reaching the Santa Teresa city, accessible by road in very good condition from the Pan-American Highway. Following this international road, is in the gap between the cities of Jinotepe and Nandaime you will find the detour labeled to Santa Teresa. After crossing the road from the detour you will find it, and at that point is where ends the road in good condition. From Santa Teresa you will follow rural roads that starts in the South of the city, and there are two ways to get to the MARENA facilities (Biological Station):

1. The route continues toward the South. You have to pass La Solera community, then the community of Veracruz de Acayo and finally you arrive to the station.

2. The route continues toward the Southeast. You arrive at the La Pita community, that continues to the Escalante community, and from there you reach the station.

Via Rivas: From the rivense area there are also two ways to reach Chacocente. The first is from the Pan-American Highway, and the second from the village of Tola. With both routes you can go to the fishing village and El Astillero beach, which is adjacent to the southern end of the reserve and from where you have access to the facilities by foot.

1. On the Pan-american Highway, between the cities of Rivas and Nandaime, you reach the bridge Ochomogo (labeled). From there you takes a detour towards the West, and continue through a rural highway to the coastal community Las Salinas, which follows the north road to El Astillero. This community ends in the Escalante river, that you cannot pass in vehicle. Therefore, you have to walk to the station.

2. You will reach the village of Tola from the city of Rivas or the Pan American Highway. Passing Tola continue the road to the beaches that ends at El Astillero, from where you can go to the station following the direction described at the end of the preceding paragraph.