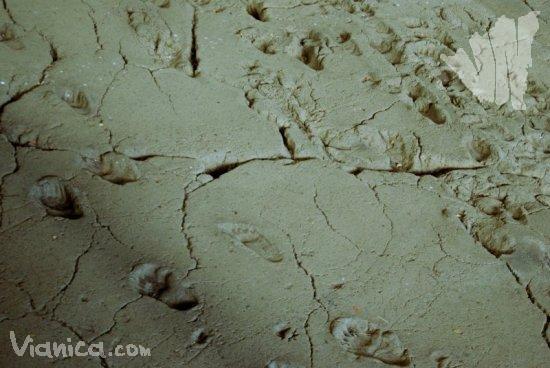 Monday through Saturday:
9AM to 4PM

Museum is temporarily closed due to damage caused by heavy rains

With the barely pronounceable Huellas de Acahualinca is referred to the ancient footprints left thousands of years ago at the borders of Lake Managua. Workers found a track of footprints by accident in 1874. Later studies proved that these footprints are 6000 years old, which makes them the oldest human footprints on the American continent.

These tracks are left behind by a group of around 10 people – men, women, and children. Some thought these people were fleeing from an erupting volcano close by, but a governmental study has rejected this idea. The people were not running and instead probably on their way to the lake to collect food and water.

Volcanic activity is the reason behind the conservation of the prints though. The original prints were left in a layer of volcanic mud. When a volcano nearby erupted – researchers are not sure which one – a layer of volcanic ash rained down on the footprints and perfectly conserved them.

Only part of the tracks has been found, the other parts probably being covered by volcanic material. In 1978, Nicaraguan researcher Jorge Espinoza excavated an area close to where the footprints ended to see if they would find more. At a depth of 4 meters they indeed found more prints, and the track is believed to continue even further.

In addition to observing the footprints, you can also see an exhibition of pre-Columbian ceramics found at the site and other parts of Nicaragua. The collection ranges from ceramics of utility use to remains and funeral ceremonial vessels; Pre - Columbian tools , a skull from León Viejo and conserved mammoth footprints also form part of the museum's collection.

Within the historic site also lies a small library dedicated to children's sector. Named after Brother Hildeberto Maria and inaugurated in May 2010, this small reading space and school assistance service to student offers different themed educational lectures and reading groups for different age groups. The library is open from 8:00 AM to 4:00 PM.

The Acahualinca footprints museum is part of the Museum's Network of Managua's Mayor and expects soon to have other exhibition halls and a small laboratory for educational use for young people of surrounding areas.

The entrance fee is U$4 for foreigners and C$20 for locals.

High school students get a special price of C$10 and C$5 for elementary students.
Foreigns with student ID fees is US$2
Foreigner residents C$20

To get there in taxi, you can simply try to pronounce the words ‘Huellas de Acahualinca’ and the taxi driver will have no problem getting there. From the Metro Centro shopping mall you should expect to pay around C$50-60 (convert). You can also use public buses of Ruta 159 102 and 106 (ask the people or driver about where is your stop).

To get there in your own car, go from the Plaza Inter shopping mall towards the lake (pass the rotary and go straight). At the third traffic lights take a left (you will see the TELCOR building on the corner). Now follow the road for about 2 kilometer, and you will enter some sort of neighborhood. From here, you are only 5 minutes away from Huellas de Acahualinca. Everybody here knows where they are, so just ask around and you will easily find your way through this maze.