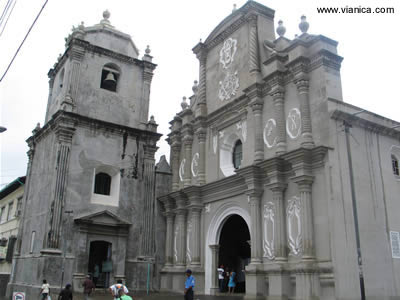 The ancient La Merced Church was constructed at the same time as the La Merced cloister, approximately in 1762, by Roman Catholic monks. The tower was reconstructed at the end of the 19th century, repairing damage caused by tremors. The interior was modernized at the beginning of the 20th century, conserving the church's lateral front sides.The La Merced church is the only church in León constructed with its tower not in line with the facade of the building. The predominant style is baroque, combined with a neoclassical style used in the facade and colonial style used at the south side of the building. Certain raised elements, like the medallions in the facade, reflect possible influences from Mexican and Guatemalan architecture.