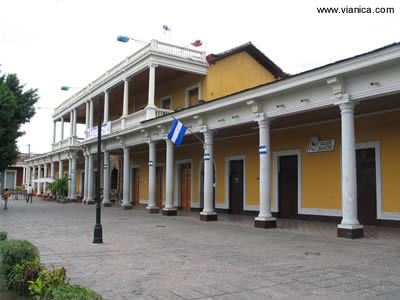 This building is located in front of the 'Plaza de los Leones', close to the central park. The style is in accordance with the style of neighboring buildings.

The first references to a building at this location date back to the second half of the 16th century. The current building, however, was constructed much later. In 1809 construction work for this building finished. In 1839 the building was called "Casa de Cadenas". It later received the name "Casa de los Leones", and it is currently called "Casa de los Tres Mundos".

In 1889 the theater of Granada was inaugurated in this building. A couple years later the building was damaged when stored gunpowder at a neighboring building exploded. The building did serve more years as a theater, until 1919. The next owner constructed the second floor, somewhere between 1920 and 1926. Since 1987 the former Casa de los Leones is in hands of the Casa de los Tres Mundos foundation, who have renovated and renamed the building.