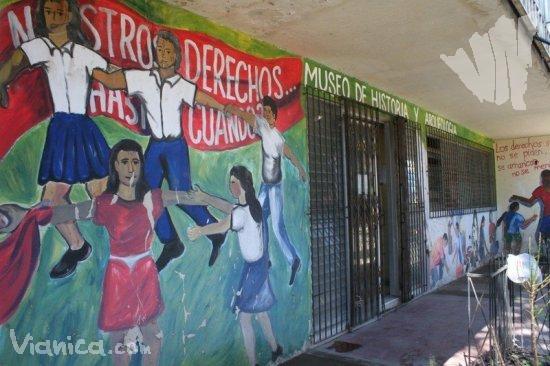 Founded in 1993 as an initiative of the historian Berenice Castellano, this small, simple museum displays several antique pieces such as national and foreign bills, archaeological pieces found in the municipality of Esteli and its communities, and much more.

The museum is managed by two locals that offer a free tour inside the establishment. The tour starts with a brief explanation on the national and foreign bills, as well as a variety of coins. The majority of them were used in Egypt, Argentina, Russia, The Netherlands, among other countries.

The area where visitors will observe old technological items, such as Russian radios, record players, typewriters and phones is located right next to the bills. Several photos of the four insurrections that took place in Estelí between 1978 and 1979 will be found next to the technological section.

During this tour, visitors will be able to see a few paintings made by artists who developed their skills in the 1980's and later became professors at the Leonel Rugama Cultural Center, teaching art to different generations of local students. The paintings are noted for their colorfulness and the images of the daily life of Northern Nicaragua.

The last area - and perhaps the most interesting one - is where the archaeological objects are exhibited. Several authentic petroglyphs are displayed in this section. The majority of them were found in the neighborhoods of La Comuna and Venecia, both located in the municipality of Estelí. Some of the pieces were so large that their carriers had to be split them in two, so they could be displayed at the museum.

Furthermore, there is a map of archaeological sites of the department of Estelí with which visitors can plan a tour. They can also ask the museum managers on how to get to these places.

Note: The museum will be moved to a new location in 2012, but the exact date is yet to be confirmed. For further information, call Berenice Castellano, director of the museum, to the following number: (505) 2713 6917.

The museum is located in the center of the city. Address: East side of the Central Park, 1 block South.