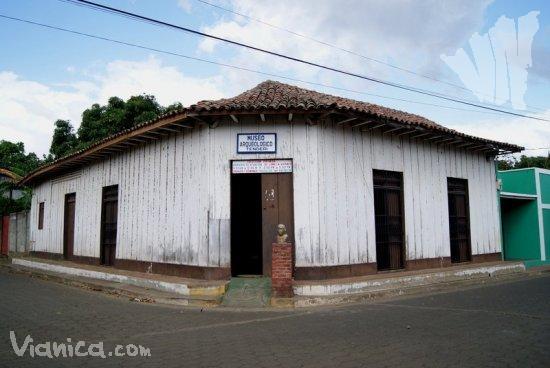 The “Tenderí Archaeological Museum” was founded by José María Gutiérrez on March 19 of 1910 and is located at the town center of Nindirí. In this museum, around 1,500 pre-columbian pieces found in the municipality are shown. They date from the year 1,200 to 1,500 A.C. The pieces in the museum are in good state of conservation.

On the other hand, there are stones and mud sculptures, representative masks of traditional dances such as El Güegüense or Los Chinegros, antique war weapons and photos and painting of petroglyphs.

This museum exhibition contains ornamental pieces such as vases and stones. Also, there are pieces used for religion or social ceremonies like funeral urns - which present diverse forms and differ depending on the social status -, censers, collars, ocarines and hunting objects such as spear points.

The majority of pieces on display at the Museo Arqueológico Tenderí were found by spontaneous excavations and were presented to the public without any formal arrangement. Later, more discoveries that led to the creation of this museum, dedicated to the conservation and display of these artifacts.

Another interesting fact is the visitor log, which dates back to 1945. Many famous Nicaraguan personalities have left their writing in this log, including: President Anastasio Somoza, President Enrique Bolaños, the poet Ernesto Cardenal and Salomón Ibarra Mayorga, creator of the national anthem.

The museum is attended by Ana María Gutiérrez (owner of the museum). . If you want to visit the museum on weekends is necessary to make an appointment. The entrance for nationals is C$5 and for international visitors C$10. Any additional monetary support is more than welcome.

For making appointments you can call to this number: (505) 8954 0570 You will be attended by the owner Ana María Gutiérrez.

The Archaeological Museum Tenderí is located at 1 block from the Nindirí Central Park, in a corner in front of the Cultural Center.

To get there, if you are traveling in public transportation, you can take a motor-taxi or bike taxi at the Nindirí entrance. From the town entrance continue a street with a boulevard that ends at the Plaza Mayor, converted in the Central Park, which shares borders with the Municipal Library Rubén Darío.

When you are at the library, turn left and move 1 block forward, at and at the corner you will find the Archaeological Museum Tenderí.