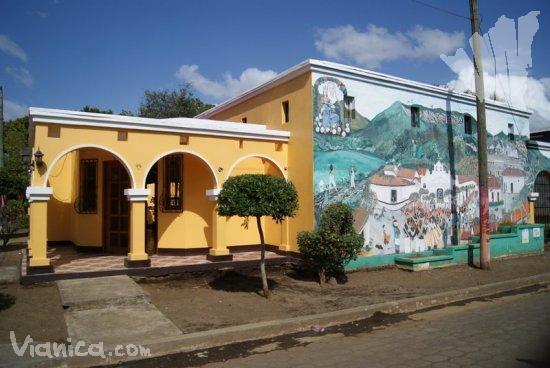 There are three main goals of the Casa de Cultura (House of Culture) in Nindirí: the promotion of local culture, formation of new talents and the artistic interaction of the city with other regions and initiatives - inside or outside the country. This is the municipal government cultural organization, and it is in permanent activity, both inside its walls and in public areas. Visitors interested in Nindirí art or traditions will be able to learn a lot from the staff of this institution.

The House of Culture is located at the town center, in a charming house suitable for the active participation and training of artists. In its offices there are two small closets with exhibitions of interest: one shows the traditional costumes of the Judea of Nindirí (street theater which interprets in the Holy Week, the crucifixion of Jesus), and the other is a small collection of pre-columbian pieces composed by 45 items, of which 34 are originals.

This place is the meeting center of new artistic talents. The House of Culture offers diverse workshops with free open participation, oriented at painting, music, crafts and audio-visual production. To participate in any workshop, the only requirement is to apply when workshops openings are announced. At the end of these training courses, the house organizes its sample to the public, at its halls and open areas in the city center.

The house is linked with native dances and other traditions. These cultural expressions are either put on display or supported by funding from the House of Culture. One of the groups that is supported is the traditional dance of the Nindirí Chinegros. They also support the folk and modern dances as well as various theater groups. Other activities organized or supported by the house are gastronomic festivals, the patron saint festivities and the nights of terrors carnival (in November). Likewise, the cultural center receives national and foreign poets that arrive to recite about Nindí during the International Poetry Festival of Granada.

It is very easy to reach the Casa de Cultura, since it's situated in the old center of the city, at one block from the central park. The exact address is: From the Municipal Library Rubén Darío, 1 block West.