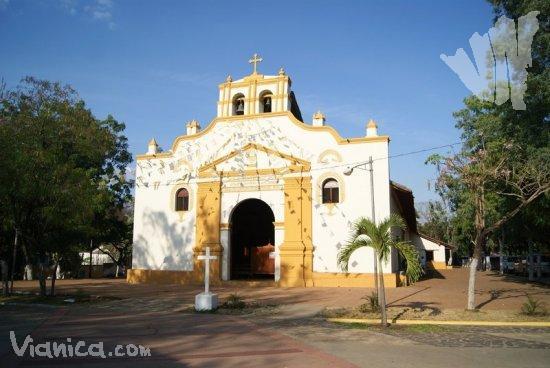 The church of Santa Ana is located in the center of the small town of Nindirí, just across the Central Park. It was founded over 400 years ago, and during that time it has been rebuilt several times, causing the loss of some features of the colonial structure of origin. On one such occasion tiles with inscriptions were found, of which its believed were made by the Indians who inhabited the area.

Some of his statues of saints and pulpits are very old. Masses are held on Thursdays at 7:00 am and 6:00 pm, Sunday at 8:30 am and then at 5:00 pm. The other days some special masses are held such as dead masses, baptisms, fifteen years and any other activity that is requested in advance. On Mondays there are meetings of the charismatic groups. On Wednesdays there are liturgies classes held at 7: 00 pm, and on Sundays catechism classes are taught in the mornings.

Santa Ana was built with a structure influenced by the architecture of Constantinople, which is why its design is different from other churches built in Nicaragua during the same period. Another feature that makes it different is that it was built in a simple way, made of adobe blocks.

In 1772 it was destroyed by the eruption of the Santiago Volcano (still active crater of Masaya Volcano), and 15 years later the first reconstruction was done in 1887. From that time it has had several rebuilds, been the most recent in 2000. At that time the facade was changed and it was entirely painted in its current color.

The church is practically on a cemetery, as the local historians say on their records. There are many people who were buried at the time of the plague, also very important people in the city was buried as well as religious groups and people who dedicated their lives to serving the church. In the current floor there are some plates with the names of some people who were buried there, there are only six of these, since you can not have information on all the bodies that are buried under the construction.

On a private car you must take the road Managua - Masaya - Granada until reaching the entrance of Nindirí (km 26). From there, turn onto the boulevard and go straight three blocks to Central Park, from where you will see the church on the right side.

By public transport take a bus Managua - Masaya or Managua - Granada and ask the bus driver to stop at the Nindirí bus stop, where you must descend. Once there you can walk to the church down the street, boulevard, or take a “caponera” (cycle-taxi) to the park, which may charge between C$5 y C$10.