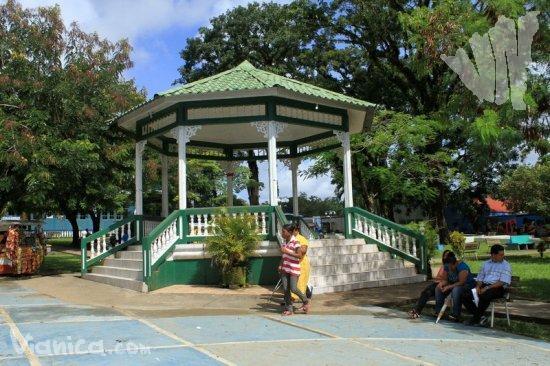 Central Park or Reyes Park is a green, cozy, safe and quiet amid the routine and congestion of the city of Bluefields. This site has all the amenities for visitors to enjoy a relaxing afternoon in the shade of leafy trees, or a refreshing drink at one of the kiosks nearby.

This site is well known for the monument it has in its main entrance, which represents the six ethnic groups in the Caribbean Region of the country. The sculpture is surrounded by flowering trees and behind it, there is a basketball court in good condition, which is often used for sports or municipal activities.

Behind the stadium are located some swings for the amusement of children and an ancient relic steamroller, which was first found in the city steamroller. This device is also used by infants as a playground where they usually make their imagination in an open space.

Besides recreation areas for adults and youth, the park has two kiosks or booths that sell soft drinks and snacks that people get after physical activity, or while enjoying good company. Around the park there are large platforms that allow visitors to tour the area on skates, bicycle or just walking. In every sidewalk you can find wooden or concrete benches shaded where you can relax while reading a book or chatting with friends. You can also do night hikes since there is enough lighting in the area.

In the corners of the park's large trees provide more shade and in its center is a gazebo. This is a small building with a domed roof and thick columns, also known as "temples of music" as they originally were considered spaces for concerts. Nowadays this is a place where visitors can relax and children play. Note that this construction has English influence in their finishes.

Another attraction of Kings Park is a painting that represents the theme of gender, masculinity, cultural, ethnic diversity, environment and teenage pregnancy. The paintings displayed on the wall were made ​​by children and young people between 10 and 18 years.

The park is located right in the central area of the city, and is one of its main reference sites. It’s just a few blocks away from the pier, so you can walk there at any time.