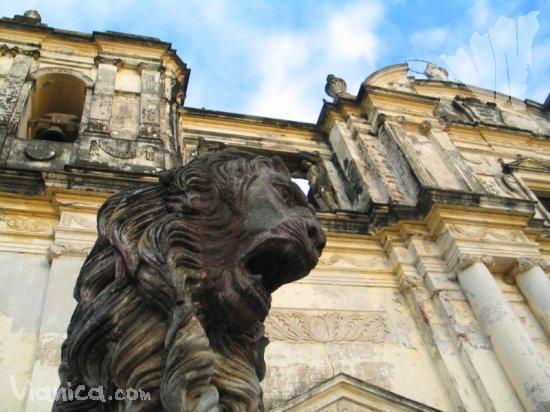 The cathedral is the most prominent building of León. It is situated at the central plaza, and the first construction of this huge building started over two centuries ago. You can enter the building, get a tour, and set your eyes on some great architecture or enjoy superb views from the rooftop of the building. It was declared a Patrimony of the Humanity by the UNESCO in 2011.

When the cathedral was being built, rich people from the area bought a tomb below the floor of the cathedral. The money was used to construct and later maintain the building, and it offered a very special final resting place for the wealthiest people from León. The most spectacular grave is the one of Rubén Darío, the most famous Nicaraguan poet, whose tomb is covered by a stone lion in the center of the church.The other bodies are buried below the cathedral and the graves are inaccessible, but there are other subterranean areas that are still accessible.

Seven small cellars have been constructed below the building, to give the cathedral more flexibility during earthquakes. These chambers have also been used to store and hide treasures. Furthermore, one of the cellars provided access to a system of tunnels that connected several churches. In case of an attack, this provided a way of fleeing from one place to the other, underground. The treasures have also been rescued from pirates once, when they were brought to another church through the tunnel.

Out of the seven cellars of the church, three are open to the public. All three have a different story. A guide will accompany you and tell about the history of the cellars. Inside the cathedral, there is a desk where you can hire a guide for $ 2. Another option is to ascent to the rooftop of the building. You will also need a guide for this, which you can get at the same place for $ 2 as well.

From the rooftop, you will have a superb view of the city of León. You can see several other churches and other prominent buildings. You can also see the area around León, including many volcanoes if the sky is clear. The roof itself is impressive, and when ascending you will understand why it took over 30 years to complete the building. The cathedral has 34 domes, many church bells (the heaviest is believed to weigh over three tonnes) and four huge statues (copied from a cathedral in Mexico) on its roof.

Even if you are not into ascending to the top or going down to the cellars, it is still interesting to visit the cathedral. Inside, you can also see some great architecture and rich decoration. The sad lion covering Rubén Darío’s grave can also be seen when walking around in the cathedral. Furthermore, plaques, paintings, and other decoration give the cathedral a beautiful interior.

The Cathedral is right in the center of the city, next to the Central Park.