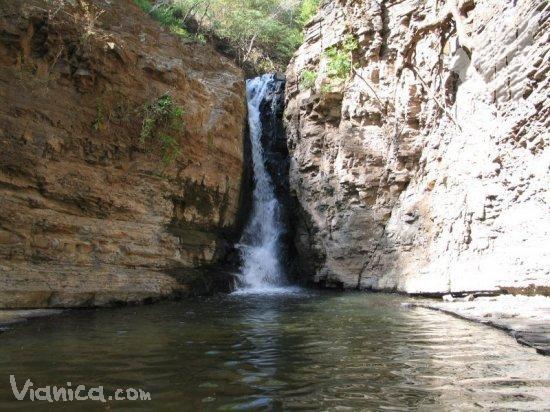 Although this waterfall was frequently visited by inhabitants of the rural area surrounding it, few other people knew about its existence. It was only until recently that the waterfall started to attract people from outside the area. However, there has not yet been much tourism development in the area and a visit to the Salto de la Culebra waterfall is still an off-road activity.

Getting to the waterfall involves traveling dusty roads, hiking steep paths, and either preparing a solid plan or frequent inquiring about the location as there are no signs whatsoever. The hiking part takes twenty minutes, departing from the community closest to the waterfall.

The waterfall starts with several levels of smaller cascades, finalizing in one large waterfall. There is a small natural pool at the bottom of this waterfall, great for swimming. The rock formations around the fall are oddly shaped by the forces of the water. The size of the waterfall depends on the season. During the raining season the abundance of water makes it reach its maximum size. In the dry season the waterfall is smaller, which allows for better observation of the spectacular rock structure.

It is also possible to hike a little up or down the river, which provides a great natural setting with beautiful surroundings.

The waterfall can be found about 15 kilometers southwest of Diriamba. There are two options to get there. The first one is in car. After heading to the beach towns of La Boquita and Casares, there will be a small road to the right just a couple hundred meters down the road. This paved road leads to the small town of San Gregorio. After a couple kilometers, the road turns into an unpaved, sandy road. San Gregorio will be reached after approximately ten kilometers. By crossing through the village the road will continue to San Miguel. After reaching San Miguel, the road should be continued to reach a part of the town that is called ‘El Melón’. After reaching a group of houses at this area, the car should be parked. The hike will start here, by finding the trail that starts in the garden of some houses. It is therefore necessary to get somebody from the community to guide this last part. There will always be somebody willing to do this. Hiring someone from the community also generates some strongly needed alternative income to the people of this rural area.

The other option to get to San Miguel is taking a bus to this area. These buses leave from Diriamba. The best option is to simply ask the bus driver where to get off to reach the ‘Salto de la Culebra’ waterfall. It is also possible to hire a local guide right away in Diriamba, in order to more easily find the waterfall. There are not too many people who offer this service, though.

Starting at and returning to Diriamba, the complete activity takes 3-4 hours or more, depending on how much additional hiking or swimming is done. Bus transportation could take longer because of waiting time.