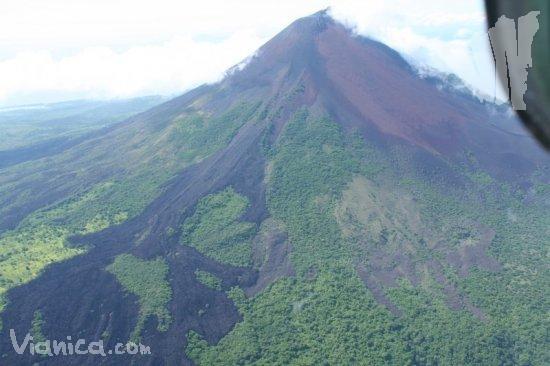 As you head towards León from Managua it is impossible to miss the perfectly shaped cone of the Momotombo Volcano as it towers 1,258 meters above sea level on the northern side of Lake Managua.

The Momotombo Volcano took a permanent place in Nicaraguan history in 1609 when a violent eruption made the inhabitants of the old colonial city of León (León Viejo) decide to move their city away from the foot of the volcano. The city of León has been rebuilt some 30 kilometers westward, but Momotombo still continues to threaten smaller settlements located around its immediate perimeter.

Although its most recent eruption was in 1905, volcanic activity at Momotombo has been measured as recently as April 2000. As the temperatures of certain parts of the volcano continually exceed 500°C a geothermal plant has been created at the base of the volcano, producing energy from the volcano's heat.

Climbing the Momotombo is a challenging task. The first step is obtaining a permit from the company that runs the geothermal plant as the plant also serves as the staging area for the beginning of the hike. Due to the fact that this it is a classic cone-shaped volcano, the trails and paths that lead up to the summit are oftentimes very steep. Volcanic sand and rocks coat most of the upper portion of the volcano so good physical shape is necessary to navigate these difficult surfaces.

It is difficult to ascend and descend within one day as the round trip can be from 8 to 10 hours so climbers are advised to either spend the night on the volcano or leave really early in the morning. Campers need to bring their own tent, and are recommended to sleep near the end of the tree line However, be warned: it is often very windy at the campsite and it can be very cold so come prepared with a sweater and a sleeping bag.

This all being said, all these hardships that may be faced climbing Momotombo yield some very substantial rewards. Views are magnificent from the volcano, as you have a great view of the crater itself, the neighboring volcanoes, the Pacific Ocean, the city of León, and on a clear day you can even see as far as the Masaya Volcano and Ometepe Island. The Momotombo is not a volcano suitable for everybody, but if you are up to it, the Momotombo offers a great challenge and an unparalleled climb that is definitely worth the effort.

The most accessible route to get here is by the Geothermic Plant, which can be reached from La Paz Centro. Near this city, in the Leon-Managua highway, you will find a sign pointing to León Viejo. You must take this road and after a while the road splits to the right for León VIejo. Instead, continue straight for 5 kilometers and, after getting to the geothermal plant, you have to walk until reaching the foot of the volcano.

There is no public transportation to get to the plant. However, it is possible to reach La Paz Centro and from there take a cab or a bus to León Viejo. Once you are at the crossing mentioned above, get off the bus and then walk in direction to the foot of the volcano.

Note:
If you are going to the Geothermic Plant on your own, you must have a permit by the Ormat Momotombo Power Company.