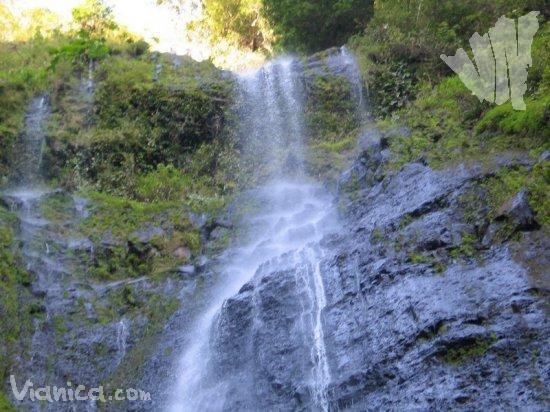 The San Ramón waterfall is located at the southern slope of the Maderas Volcano on the island of Ometepe, about 4 kilometers from the small village of San Ramón. The high, natural waterfall can be reached after a nice hike, ascending the forested foot of the impressive volcano.

There are several starting points, but the best access is probably from the Biological Field Station, located at the border of the village of San Ramón. There is a path that leads not only to the San Ramón waterfall, but also to the top of the Maderas Volcano. Nature is in abundance along this trail, and there are many animals that can be seen on the way to the waterfall. Howler monkeys live in this area and are not unlikely to be seen. By being alert and lucky, different types of snakes can also be seen, including boas. Other animals that can be seen include a wide variety of bird species, as well as insects and even bats.

Crystal-clear water flows from the waterfall year-round, and halfway up the trail there is a hydro-electric plant that uses the water pressure to create electricity. Further down, the water is collected to be bottled as pure ‘Maderas Volcano Water’. The water pipes can be seen along the trail, and the visitors will also pass the hydro-electric plant. In fact, at this point the path splits into two directions: the path to the right leads to the waterfall, the path to the left to the top of the volcano.

It will take 1.5 to 2 hours to reach the waterfall. At the end the path becomes a little steep, but in general the hike is not very tough. There are some great views of the gigantic Lake Nicaragua as well. The temperature and humidity can be quite high, so after reaching the waterfall a little period of relaxation is a nice reward. The waterfall is about 50 meters high. The width varies with the season – in the raining season the waterfall can be over 10 meters wide. Nevertheless, even during the dry season the San Ramón waterfall is an impressive sight. Although there is no spacious bathing area below the fall, visitors can easily cool off and enjoy the fresh water by simply standing below the waterfall.

Returning to the village takes in general less time than arriving at the waterfall, because now it is mostly a matter of descending instead of ascending.

It is recommended to bring enough water or other drinks (this can also be bought at the Biological Field Station). Sunscreen can also be useful, and of course bathing suits for the ones who plan to cool off below the waterfall.

The village of San Ramón can be reached by bus, car, or (motor) bike. The unpaved road makes it a bumpy ride, and a high clearance vehicle is necessary. The entrance fee at the Biological Station is US$2. There are also lodging options available at this location, providing a perfect starting point for hiking to the waterfall or climbing the Maderas.